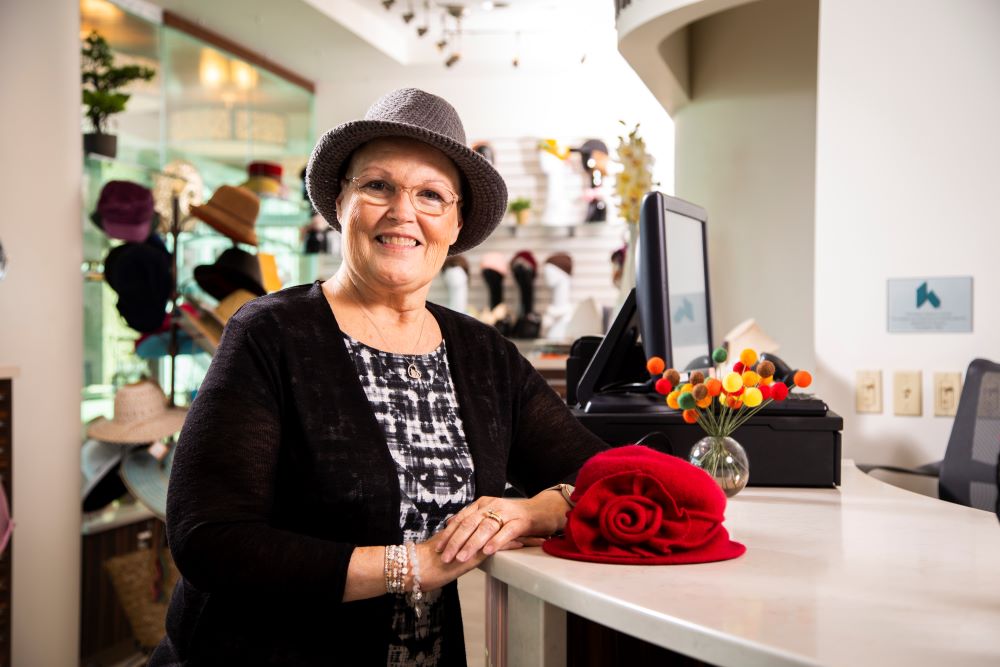 Connie Miles typically spends March celebrating her birthday. March 2022, however, was anything but typical for her.

When her mother got sick, Connie put her own life on hold to take care of her. This meant skipping her annual mammogram appointment in September. Connie noticed she felt fatigued during the winter but focused on her mother instead. Finally, the following March, she decided to schedule her annual appointments before her birthday at the end of the month.

Connie’s mammogram appointment began like any other. One more appointment to cross off her list, she thought. But her doctor noticed something abnormal. Connie’s fatigue wasn’t due to winter weather or taking care of her mother. She had a tumor in her left breast.

“It was very shocking,” she says. “I didn’t even know what to think.”

Connie returned for an ultrasound, followed by a biopsy. Instead of celebrating her 61st birthday, she awaited her diagnosis.

“I remember sitting there thinking, Wow—why me? And then thinking, Why not me?”

Because of the fast-spreading nature of her cancer, Connie and her doctors scheduled treatment to begin on May 17.

Before her first day of treatment, Connie and her daughter visited the Renew Boutique and Spa located in the Kettering Health Cancer Center.

Connie looked around the store, browsing the scarves and wigs she might soon wear, while her daughter spoke to the store manager. As they left, her daughter revealed she had signed up Connie for Courageous Beauty, a free class funded by the Kettering Health Foundation. The class aims to empower women by teaching them to embrace and care for their changing appearance throughout treatment.

Connie, a former model in high school, says she loved discussing makeup and skincare in the class. It gave her a sense of control to take care of herself at a time when her body seemed to work against her.

“Making sure that your skin is good and clean and moisturized is a lot,” she says, “especially when you don’t feel good.”

The best part of the class, Connie says, wasn’t the skin care or makeup, but talking with other women going through the same journey.

“It let me know that I was not just a number or a patient,” she says, “but that I was a part of a big network of women who have walked the walk and can talk the talk.”

Jaime Testa, manager of Renew Boutique and Spa, says it amazes her to see women who attend the class come together and support one another.

“It’s been really neat to see the community that it builds within the women,” she says. “It’s not so much about the facilitator and what they bring to the table, but more of the comradery between the women that are sitting together.”

Courage to face her future

For Connie, meeting women in various stages of treatment helped her prepare for her own treatment.

“There were some girls there who hadn’t lost their hair yet—I was one—and then there were some that had already begun to lose their hair,” she says. “To listen to their journeys was encouraging. Aside from the cosmetics, that was really awesome because we got to hear their stories and that gave us hope.”

She remembers one woman who had lost her hair and did not wear a hat or wig, an act that gave Connie the courage to face her future.

As for the name of the class, Connie says it perfectly described the women she met.

Connie admits she never imagined herself going through chemotherapy. She never pictured losing her hair or getting weaker as the treatment gets stronger. But one thing—or rather, seven—keeps her fighting through it all: her grandchildren.

Connie’s seven grandchildren range in age from 4 to 19. She often looks at photos and cherishes her memories with them. She remembers them popping popcorn, snuggling up in her king-sized bed, and watching movies late at night. This became a tradition, what they call “midnight picnics.”

“To clarify,” she adds with a laugh, “they weren’t at midnight, but they didn’t know.”

Staying present in their lives remains her greatest goal.

Connie’s favorite place to be is the ocean. After beginning treatment, she planned a trip to Florida with her family. Because of her chemotherapy, her oncologist warned her about excessive sun exposure, but Connie was determined to spend quality time with her loved ones.

With SPF 50 sunscreen and UV-protection clothing, she took a dip in the ocean with the kids. Connie had taught all her grandchildren how to swim, so swimming in the ocean with them was a special moment. After enjoying the warm seawater, she retired to the shade of her cabana.

Connie soaked in the perfection around her—the sun, the waves, her family—satisfied that she hadn’t let her diagnosis stop her from making memories. She felt in control.

And then, while still on vacation, she began to lose her hair.

Connie looked at herself in the bathroom mirror and watched the cancer remind her of its existence. She felt hopeless but thought about the brave women she met before beginning treatment.

“I remembered those ladies in that class, being courageous lions, and that’s what I want to be,” she says.

Connie found the courage inside of her to enjoy the rest of her vacation despite losing her hair.

With the support of her loving family and hope from Courageous Beauty, Connie continues treatment and tries to make memories every day. She shares one piece of advice, something that keeps her moving forward throughout this journey:

“Take those photos, take those videos of the people that you love the most,” she says. “Because when you’re not feeling so good, you can reflect back, and it’s the best medicine ever.”

Courageous Beauty is a free, single-session class for patients in active cancer treatment.