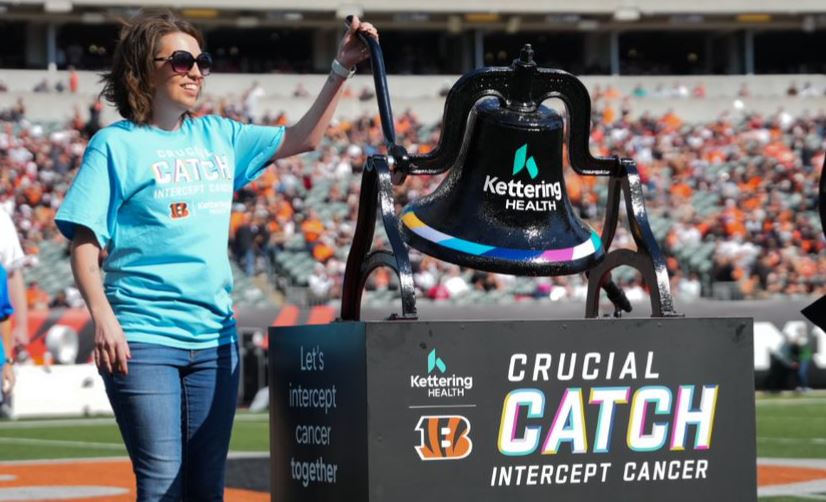 After five days in the hospital, Lisha Michels received her diagnosis. She heard two words she never expected: cervical cancer.

“The world came crashing down,” she said.

Climbing to the top

With two kids and 10- to 12-hour shifts managing a restaurant, Lisha lived a busy life. She worked hard to get to the top of the restaurant business to provide for her children.

Any free time she had was spent taking care of her family, not herself. But she didn’t mind.

“I’m a mother first and foremost,” she said.

She finally found time between shifts to see her OB-GYN and get her routine Pap test. After the screening, Lisha walked right back into her busy schedule.

She lost her health insurance shortly after, so she ignored the phone calls from her OB-GYN. She put it on her to-do list to call her doctor once she had insurance again. But with her time split between her restaurant and her family, following up with her doctor fell to the bottom of her list.

Derick Aldridge, Lisha’s fiancé, noticed she was fatigued and not her usual self. Knowing she didn’t like to ask for help, he convinced her to go to Kettering Health Preble. They didn’t know it at the time, but in less than a week, Lisha’s life would change.

Several tests came back inconclusive, and Lisha was transferred to Kettering Health Main Campus for further testing. After five long days, Lisha and Derick had their answer.

Lisha watched family members go through radiation in the past. She saw them become sick and weak, trying to fight cancer. She told herself she wouldn’t choose that if it were her. She would choose to live out the rest of her days without chemicals flowing through her body, making her sick in hopes of making her better.

But when she heard the words “cervical cancer” while her two kids waited at home, Lisha realized she didn’t have that choice.

She began treatment in August 2021, traveling 45 minutes back and forth from the Cancer Center every day. Lisha expected the exhaustion and nausea, but she couldn’t predict the toll treatment would have on her mental health. Every day felt like a battle with herself. Her friends, family, and care team encouraged her to stay strong, but all she wanted to do was give up.

“It takes all you have,” she said. “You have to push yourself to limits that you didn’t know existed.”

A tornado of feelings

Lisha’s treatment ended on December 10, 2021, after eight rounds of chemo and five rounds of internal radiation. Dr. E. Ronald Hale, Lisha’s radiation oncologist, told her she had beaten cancer, displaying her latest, cancer-free scan as proof. Lisha didn’t know what to think. One moment she was a cancer patient, the next moment she wasn’t.

“I was excited, confused, and a little worried that it would come back,” she said. “It was a whole tornado of feelings.”

Before her diagnosis, Lisha spent most of her time managing the restaurant. She focused on climbing the ladder and showing her children the importance of hard work. But after her diagnosis, she realized how much she missed.

“Sometimes I wonder if it was a little bit of divine intervention because I had worked so hard to get to the top,” she said. “But once I made it there, it was not what I expected.”

During one of her previous long sessions in the infusion chair, Lisha told her brother that all she wanted to do was go to the beach. And that’s exactly what she did after becoming cancer-free. The two visited their sister in Virginia, and Lisha appreciated her life in a new light.

“I have a new perspective on life and what I want it to be,” she said.

Lisha is back in the restaurant world, but she works fewer hours and spends more time with her family. She’s excited never to miss another of her daughter’s basketball games.

Though her recovery from treatment continues, she feels better than ever.