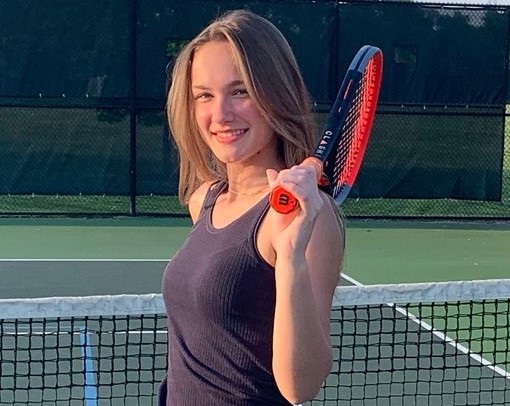 “When I first started, I actually didn’t like tennis that much. But as I got older, I started really liking the sport, and it kind of took over my life. It’s a thing that I love,” she said.

Sofia spent most of her time practicing and playing tennis until she suffered a fractured spine and bulging disk in her back. At first, she felt a small pain on her right side that she thought was growing pains. After physical therapy, she continued to play. That’s when the pain on her left side began.

“My left side started hurting so bad to the point where I had a hard time walking,” Sofia said.

Sofia knew she couldn’t ignore the pain any longer, even if it meant taking time away from her passion. She saw Dr. Kali Hollingsworth, who identified her injury and recommended physical therapy again. Hearing that she had a fractured spine scared Sofia, but Dr. Hollingsworth helped reassure her that she would be OK.

“It was a really scary thing for me, so when she was positive about it, it actually kind of helped me more,” she said.

Sofia spent four months in physical therapy working to strengthen her muscles to play tennis again safely. Without the physical therapists there to support her, Sofia says the experience would have been much more difficult.

“It was good to have someone to talk to about the problems, and it was also good to know that I was getting better,’’ she said.

Now, Sofia is back playing the sport she loves and does regular conditioning to rebuild her strength and stamina.