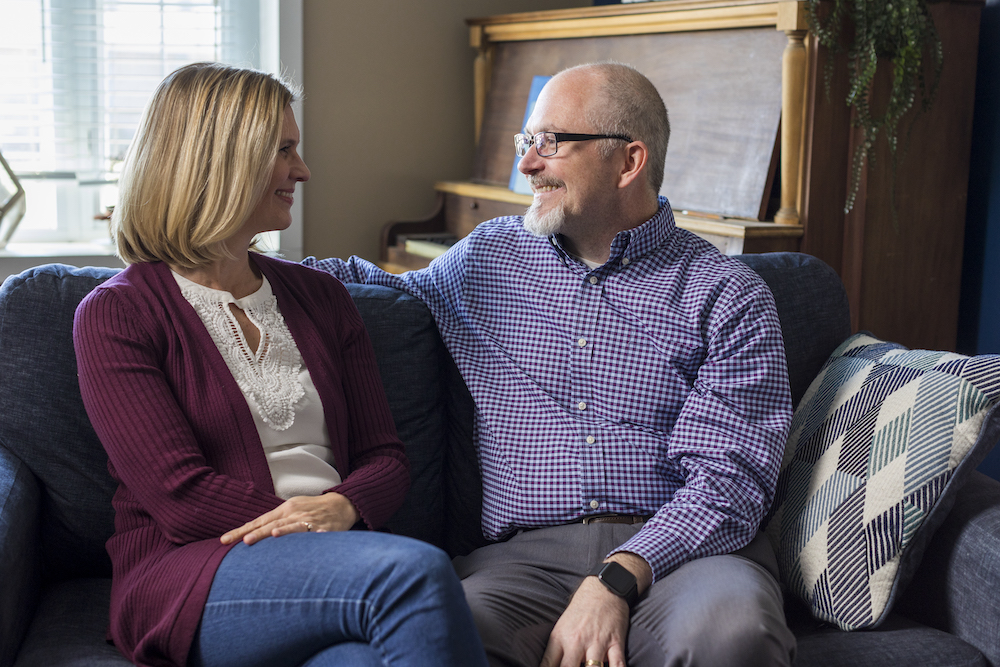 There is something poignant about a person’s last words—the phrases uttered with one’s last breaths create meaning that outlives the person who speaks them.

Many don’t consider their final moments until they look death in the face. Others think about the legacy they hope to leave—even in the last few minutes they have to do so.

Michael McKay had given a lot of thought to his last words.

“Looking back on it, I don’t know why I’ve done this over the years,” Michael said. “I think maybe I’ve watched a lot of movies where the main character has a final opportunity to say something important.”

Anyone who meets Michael, though, sees that his intentionality comes from more than movies, but from a deep faith. An assistant professor of Theology at Cedarville University, Michael holds his faith as close as his family. And his beliefs have led him to have answers for the big questions: Why am I here? Where do I go when I die?

Michael devoted his life to sharing God’s love to his students and family—a vocation evident even in his final words.

Michael and his wife, Lee-Ann, awoke to an unremarkable Saturday. With little on their to-do lists, they looked forward to a lazy day around the house. But then Michael felt a sharp pain in his neck.

“The pain almost felt like it was a sound,” Michael said. “I don’t want to say I heard it, but I wondered if I had maybe tweaked a muscle in my back.”

He tried to walk it off. But a potentially tweaked back soon gave way to a completely numb left leg. And Lee-Ann found Michael scooting down the stairs, unable to trust his body to walk him down safely.

“We drove to the emergency room at Greene Memorial just down the road,” Michael said. “So thankfully we were only a short distance from that hospital.”

A sobering quiet blanketed Michael’s room as he and Lee-Ann waited for his life-saving procedure.

Michael’s head spun with the words he’d rehearsed in his head for so long—words he couldn’t believe he was about to share.

“One of the first things that I told her was, ‘I don’t want you to be angry at the Lord for what’s going on here. I don’t want you to be bitter.’ I know a lot of people blame God or the things that happen in their life that they might consider evil or bad. But I didn’t want my wife and kids to wrestle with that,” Michael said. “I wanted them to know their dad and their husband was dying very grateful for the life that he had been given.”

With tear-stained cheeks, Lee-Ann took what Michael said to heart.

“I remember thinking, ‘How am I here at this point right now with my husband sharing these last words with me?’” Lee-Ann said. “And my heart just felt like it was breaking at one minute, but the next minute I just felt this overwhelming sense of love and thankfulness to the Lord because I left that conversation knowing that first and foremost, my husband loved the Lord. And second that he loved the kids and me.”

Some peace to hold on to

Lee-Ann needed every ounce of that gratitude to endure. She settled into the waiting room at Kettering Health Main Campus, having no idea she’d wait for news about Michael for almost 11 hours.

Still, she found pockets of solace in friendly faces along the way.

“One of the guys in the ambulance found me and said, ‘Your husband wanted me to tell you that he loves you very much,’” Lee-Ann recalled. “It was so sweet. I thought, ‘Lord, what a sweet blessing to have.’”

A moment with God

Michael gave his family the words he needed them to hear. But as he was taken back for surgery, he needed to have one last conversation: this time, with God.

“My last thing I really consciously remember doing is praying,” said Michael, “and asking the Lord if he would spare my life.”

Michael didn’t want to leave his wife and kids behind. He knew he had plenty of memories yet to make with his children, and he didn’t want Lee-Ann to be alone. But when it came to accepting his death, Michael felt ready.

Michael’s faith tells him when he dies, he’ll be resurrected as Jesus was. And his last words before surgery were evidence of the peace he made with dying.

“I went into surgery thinking, ‘Oh, well, I might be with the Lord Jesus today,’” Michael recalled. “That was a very sobering thought. But it also gave me hope that this is not the end. And even though I might be leaving all of these things that I enjoy and love, this would not be the end of my life.”

What were hours of waiting for everyone else felt like minutes for Michael. The first words Michael remembers hearing when he woke shaped his story just as much as the ones he thought would be his last.

“The first thing the nurses and doctors told me was that it was a miracle,” Michael said.

And thus began the period Michael calls his “bonus round”: the extra time Michael never expected to have.

“It gives you a little bit of, OK, God’s given him longer with me, let’s make the most of this time,” Lee-Ann said. “We just never stop feeling such gratitude for the Lord and for the health professionals who brought Michael to this point.”

Physically, Michael is still not 100% back to where he was before surgery, but he’s closer than he’s ever been.

“It has provided greater nuance and experience for me to be able to articulate my desire to be obedient to the Lord Jesus. To love my wife and children and those around me,” said Michael. “To be productive with the life that he has given me. And now, with that sense of gratitude and thankfulness, I really do feel and think that I’ve been given a bonus round.”.

Michael is back in the classroom and doing what he loves most. But now with even greater insight. He sometimes ties his own story into the lessons he shares with his students, his testimony serving as his own reminder of how precious life is.

“When we think about our own mortality, we often like to push that off as much as possible. And yet we all know it’s going to happen,” Michael said. “I think it’s healthy for us to think about it before it happens because it causes us to ask the big questions in life.”

Michael is still processing the grasp he now has on the brevity of life. And he’s taking advantage of every moment—rejoicing, weeping, and thanking God.