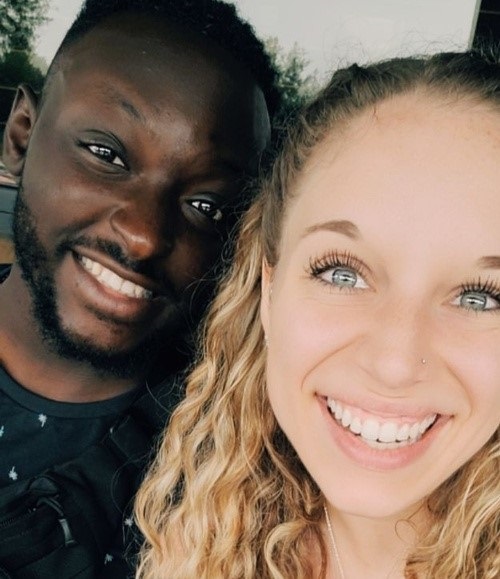 On New Year’s Eve, Gabby Wacker and her boyfriend, Earl Watson, sat in the emergency room anxiously awaiting her test results. Earlier that night, Earl insisted doctors take an MRI of Gabby to figure out what was causing her pain.

“I think it was God pushing me to be her advocate,” he said.

The test results came in: Gabby had a brain tumor. Gabby and Earl were both shocked.

“It’s not something a 24-year-old wants to hear,” Gabby said.

Throughout the holiday season, Gabby had experienced blinding headaches and pressure that worried her. She received migraine medication that helped temporarily, but the pain never entirely went away. Upon returning from visiting family, Earl immediately saw that Gabby was in pain and not getting any better.

“As more time went on, her condition continued to deteriorate,” he said.

Her first craniotomy took place on Jan. 6 with Neurosurgeon Dr. Peter Bouz. Although nervous, she fully trusted Dr. Bouz and the others in the operating room for a special reason: they had once been her coworkers.

For about three years, Gabby worked in surgery at Kettering Health, creating close friendships with those who would eventually perform her life-saving craniotomy.

“I just felt at peace and comfortable knowing that my friends that I’ve worked with for years at this point are helping save me,” she said.

Gabby’s second craniotomy happened 21 days after her first. This time, Dr. Bouz kept her awake to make sure that her speech center, which the tumor was located near, was not affected. Gabby knew she was in good hands.

“It was a scary experience, but being in the operating room with people you’ve worked with for years is like a calming feeling,” she said.

Today Gabby is in treatment and showing improvement. Earl says he is grateful for the voice that told him to look further.