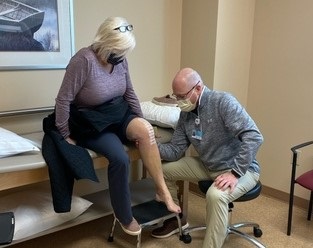 Diane Hansen’s trip to the zoo was supposed to be a day for family bonding. Instead, she trailed behind her eager grandchildren, constantly scanning for the next bench she could rest on. Her knee pain was excruciating. She knew it was time for surgery.

Diane saw Dr. Michael Welker for her knee pain for several years, receiving countless cortisone shots to manage her arthritis. Dr. Welker warned her she might eventually need surgery but ultimately left the decision up to her. Though reluctant, Diane knew she couldn’t put it off any longer.

“I couldn’t even walk. I had to stop. Walking was very painful. So I knew,” she said.

In January of 2021, Diane had full knee replacement surgery with Dr. Welker on her right knee, the worse of the two. After surgery, Diane spent a week in in-home physical therapy, something that was very difficult for her at first.

“It’s almost like you have to learn to walk again,” she said.

At the beginning of her recovery process, Diane felt pain she never imagined. The exercises and stretches she did to regain strength and mobility in her knee were difficult and made her question her decision to get surgery. But she began to notice improvement, and over time, the exercises became easier and less painful. By the end of her two months in outpatient physical therapy, Diane loved working with her trainers to strengthen her knee.

“I didn’t want to leave. They literally had to kick me out,” she said with a laugh.

Her eventual appreciation of physical therapy gave her the confidence to do it all again. A year after her first surgery, Diane decided to tackle her left knee. She requested Dr. Welker and the same physical therapy team as before, remembering the great experience she had with her right knee.

This time was different. Physical therapy was still painful and difficult, but she knew eventually her knee would improve. This time, Diane knew her hard work would pay off.

“I knew in my mind the second time that it’s going to get better. There’s a light at the end of the tunnel,” she said.

Diane is no longer in physical therapy but still practices her exercises and stretches at home to further strengthen and heal her knees. She looks forward to the day when both knees are fully recovered. Already she feels significantly better than before surgery.

“There’s still some pain there, but nothing like it was in the beginning,” she said.