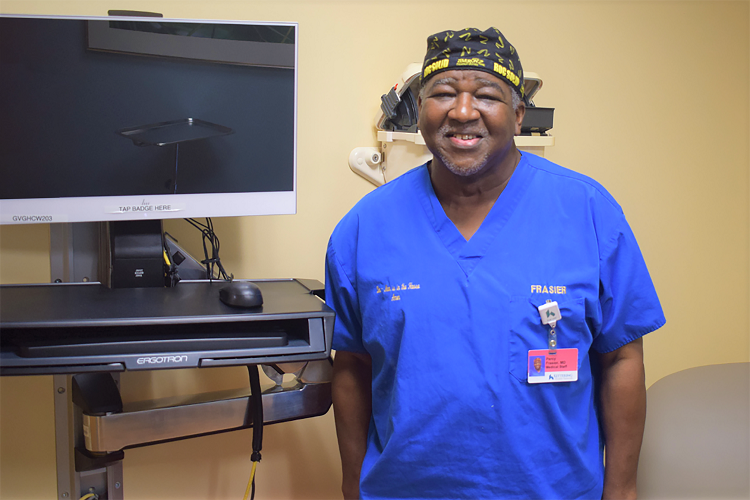 Walking into Bill’s Donut Shop in Centerville, Ohio, Dr. Percy Frasier sees the warm glow of the display case. As he gazes at the glazed and sprinkled donuts, he notices two people looking at him and whispering. They stare as he stands in front of the counter. And then he hears a familiar sentence.

He smiles, turns, and asks them how their families are doing.

Their conversation, backdropped by coffee and donut orders, sounds like the stuff of small-town lore. But for Dr. Frasier, this interaction comes naturally, especially after helping thousands of mothers deliver their babies.

In the mid-1960s, growing up in South Carolina, a young Frasier, a committed and studious high-school student, joined a study group. The group he found consisted only of girls, which didn’t bother him. Being raised by a single mother, he was comfortable around women.

He soon became friends with them, learning from them. Overtime, though, he noticed a confusing trend.

“They would disappear from school.”

But they weren’t moving or getting jobs. They were getting pregnant. And cultural norms at the time led to their becoming ostracized. And they were told to finish their high-school education outside normal school hours.

“You couldn’t come to school if you were pregnant or had a baby. You had to go to night school.”

Even then, a young Frasier saw how his friends suffered.

“Their reputations had been destroyed,” he said.

These teenage students were pregnant with no support system when they needed it most. They were on their own.

This experience stayed with him, becoming a decisive moment in his story.

And years later, when Dr. Frasier declared a specialty, he knew what he wanted to pursue.

Dr. Frasier chose to be an OB-GYN. And more than four decades since then, he has changed countless lives.

“I stopped counting at 10,000,” he said, commenting on how many babies he’s delivered, how many families he’s impacted

After 40-plus years of not only serving as an OB-GYN but also as an advocate for woman and families in Dayton, it’s safe to say he’s impacted an entire community, leaving an indelible mark on the city.

As impressive as that number is, Dr. Frasier credits his success and influence on the Dayton community to one person:

“I believe God brought me this far. I give him all the glory.

Through all the obstacles I faced—racism, prejudice, all the obstacles—none of them have succeeded in stopping me from what God had planned for me. The good Lord has blessed this poor South-Carolinian boy, who came from nothing.”

The irony of his life isn’t lost on Dr. Frasier.

He’s gone from a fatherless home to being the first caretaker thousands of babies have seen as they entered the world.

He’s gone from witnessing mothers to-be who’ve been shunned by society to being a faithful advocate, even friend, to thousands of women during life’s most exciting—and scary—adventures.

Dr. Frasier has done a lot. And he’s learned a lot. Growing up when and where he did, followed by years of education, and more than four decades as an OB-GYN, he carries a wellspring of expertise and understanding. As a husband and father, he brings confidence, humility, and empathy to his practice.

And as a healthcare leader in the city, Dr. Frasier has a few life lessons he holds close to heart, including an understanding of what matters most.

“It should be God, family, then your job—in that order,” he said. “Nothing is that important if you can’t spend time with your family.”

And he sees every patient he has treated over the years as a blessing, an important part of his own story.

“I’m blessed by knowing them. They have taught me over the years. I’m happy they decided to pick me as a doctor,” he said. “It’s been a privilege to have the honor to take care of them.”

A career worth celebrating

Patients of Dr. Frasier’s are equally proud to be a part of his story.

Recently, Kettering Health mentioned Dr. Frasier in a Facebook post about Kettering Health Dayton Women’s Care expanding. What followed was a stream of comments sharing anecdotes and memories about Dr. Frasier, gushing with appreciation for their OB-GYN, who helped them at their most vulnerable.

Whether it’s in a donut shop or on a Facebook post, wherever Dr. Frasier seems show to up, he’s more than recognized; he’s celebrated.

A worthy response to someone who’s spent his career coming alongside thousands of mothers and families, and who has all but helped deliver the city of Dayton.