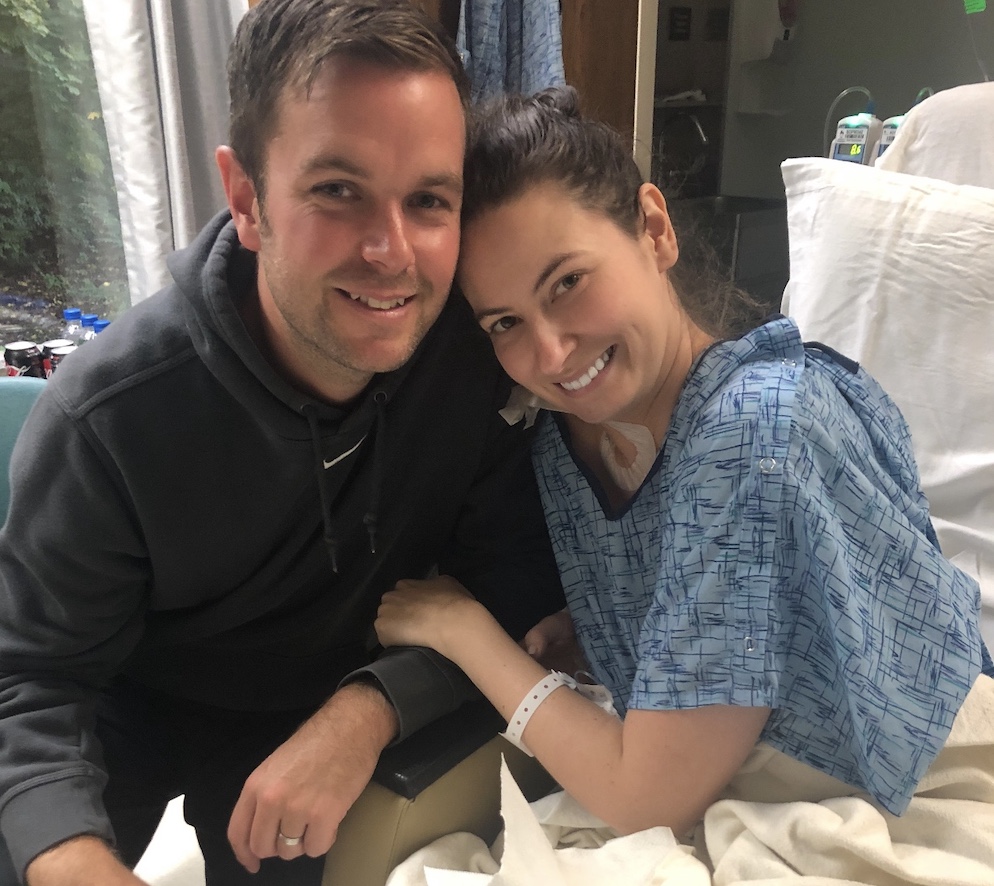 Jeri heard a pop, then a fizzle in the back of her head.

She stopped typing as her laptop screen blurred. But the sudden dizziness didn’t worry her; she knew it was getting late. She just needed to send these documents before the next day’s court hearing.

But when she heard a firework go off in the back of her head, she did worry a bit. Turning to her husband, Dean, on the other end of the couch, she realized she couldn’t move or speak. And worry evolved into full-blown panic.

She managed to toss her laptop from her lap, which slid to the floor, getting Dean’s attention. The nonsensical words that escaped Jeri’s lips were so shocking, she giggled. But the fear in her eyes told her husband this was serious.

Finally, she forced the right word out: “hospital.”

A humanitarian at heart

At 30 years old, Jeri had already crafted her life around advocacy. Her career as a social worker and crisis therapist meant she held legal guardianship of 42 children who were physically, mentally, or sexually abused. But the care she showed for others extended beyond her office door.

During nights and weekends, when she managed to stop working, Jeri volunteered at homeless shelters and worked with adults who never learned how to read, teaching them English as a second language. In the midst of it all, she went to school full-time to earn her graduate degree.

A plate this full led to stress, lack of sleep, and the more-than-occasional headache. But Jeri was never one to put herself first. Even as a child, Jeri missed only one day of school due to sickness.

So, when she had to leave work because her head pain had become so unbearable, her supervisor knew she must be suffering.

The gravity of it all

Hours after her headache sent her home, Jeri entered the emergency room.

“They asked me to enter my social security number, and when I went to type it in, I realized not only did I not remember my number anymore, but I also did not remember what numbers were,” Jeri said. “It was really terrifying because I was cognizant but not intelligent.”

This told the emergency staff everything they needed to know. Jumping into action, they ordered a CT scan that confirmed their fears: Jeri was having a stroke.

She needed to be transferred to Kettering Medical Center for emergency surgery to save her life.

Jeri was prepared to get back in the car with her husband to get where she needed to go.

“I thought, ‘OK, let’s fix that. Like, whatever we gotta do. Is there medicine we can do? Just totally naïve to the situation as a whole,’” Jeri said.

But after three tries to convince the hospital staff her husband could drive her in lieu of an ambulance, a nurse leveled with her, “Ma’am, you have to understand, you may die.”

From powerful to patient

The complexities of the blood clots in Jeri’s brain required a three-hour thrombectomy—a procedure that typically takes an hour. Jeri was awake the whole time.

“Here I am, just 30 years old, lying on a surgery table, and I can see my brain on the screen in front of me,” Jeri said.

Dr. Akil Patel, who performed the surgery, reassured her throughout. During this procedure, Jeri heard her voice for the last time.

Unable to speak or move, Jeri the advocate, the humanitarian, the voice, had to be Jeri the patient. Her body gave her no choice. As Jeri cried, unable to communicate, her nurse anesthetist held her hand for the entirety of the procedure.

“It made me feel a bit more calm,” Jeri said. “I stopped crying at that point because I felt that human connection.”

She didn’t know it at the time, but this moment where she felt most powerless would determine the trajectory of the rest of her life.

The surgery ended around 3 a.m., and Dean had sat panicked in the waiting room for almost four hours. With his family in England and Jeri’s in Virginia, he was alone.

Dr. Patel soon found Dean to tell him Jeri made it through.

Jeri survived multiple painful procedures, but she had a long road ahead. After surgery, she couldn’t move, speak, read, or write. She could only move her eyes, but she was cognizant the entire time.

“I was lying there in the ICU, and I realized that I was really just a body,” Jeri said. “It’s really hard to watch the world go on without you.”

The next 10 months held challenges for Jeri most people expect to face only once in life—learning to speak, write, and even eat again.

Through tears and tossed clipboards, Jeri forced her way through recovery, determined to get back to the life she led before.

In sickness and in health

The first time Jeri could eat real food, she chose pasta—her favorite food. The first bite she took, she bit her cheek, and threw her tray. The tears that followed weren’t so much from the pain in her mouth but the brutal reminder of how far she had to go.

Dean reassured her they would get through it. He would be there next to her every step of the way, but there would be no more throwing trays.

“My husband really had to be my voice,” Jeri said. “Luckily, we’re very good at charades.”

The Wards didn’t expect their first couple years of marriage to be filled with appointments, scans, and therapy, but Dean worked with Jeri on her words and walking every day

“I know he said in sickness and in health, but I don’t think he realized that was going to be just a year after our wedding,” Jeri said.

It’s true that Jeri never heard her voice again. Her strong Southern accent faded into an interesting new sound while learning how to talk again in the Midwest and practicing with her husband, a native to England.

“A lot of people thought I was foreign, which is really funny, because I’m from a town with one red light,” Jeri said. “But it was really sweet because it was just a testimony to how hard my husband worked with me to be able to speak again.”

Jeri’s stroke took a lot from her. But there is one thing it gave her: a new voice. It sounds a bit different. But she’s using it in the same way—to advocate for others.

As soon as Dr. Patel cleared Jeri to work again, she started a new position at Life Connection, working with the emergency department, Brain and Spine providers, and stroke families at Kettering and Sycamore medical centers as well as Troy Hospital. She brings a perspective to her job many other professionals may not have.

“I firmly believe this was supposed to happen,” Jeri said. “People always think I’m nuts when I say that, but it’s really hard for medical professionals or people in law or research to understand stroke fully, because they never had it happen.”

The woman who once tried to refuse an ambulance mid-stroke is now working to pass laws that help EMS professionals transfer stroke patients to the care they need. Her work has even gone international.

“I think going from not having a voice to being able to speak to people in 36 countries, it’s magical. It’s just insane. But I think that’s testimony to having willpower to overcome obstacles that seem impossible at the time.”

Though Jeri always knew her purpose was rooted in service to others, everything clicked after her stroke.

“Knowing that people go to the hospital because of the education that I’ve shared makes me feel like all this terrible time and struggle and heartache and depression and anxiety was all worth it,” Jeri said.

“Without this experience, I wouldn’t have been able to save as many lives as I have.”

Find stroke care that gets you and your family back to enjoying life's best.