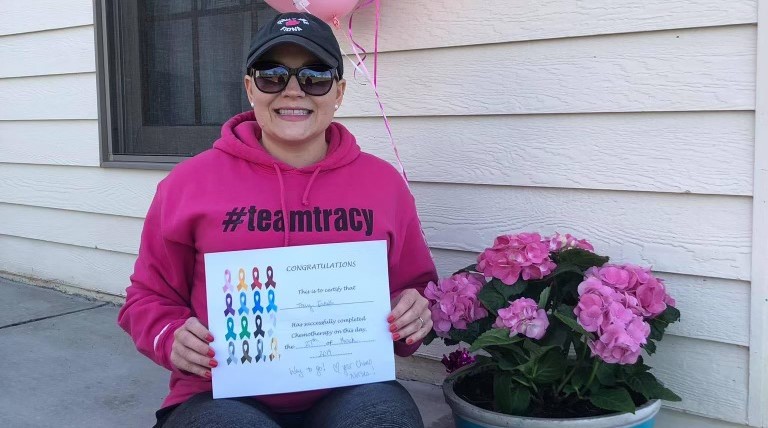 Tracy Evans laughs next to the card aisle at a Walmart in Xenia. Her ten-year-old son found a large cardboard cutout of a cat’s face and put it overtop his. Her five-year-old son followed suit with a grumpy baby’s face.

She takes their pictures and texts them to her husband, Curtis. Standing near the “Feel Better” cards, Tracy tries to treasure the encounter with normalcy, before it slips away.

She roams the aisles, looking just past everything. And she remembers.

Today is Saturday, September 22, 2018. And the aisles show signs of summer’s farewell and fall’s approach. Decorations and clothes surround shoppers like Tracy, boasting shades of red, orange, and yellow. Along with another color: pink.

Tracy wanders down an aisle spilling over with pink shirts and towels and stickers, in honor of Breast Cancer Awareness month, or “Pinktober.”

A registered nurse (RN) for 15 years at Kettering Health Dayton, Tracy is no stranger to Pinktober. She’s seen the shirts hanging in the medical center’s gift shop as she’s walked past, on her way to scrub in on surgeries.

But today, engulfed in a sea of pink, Tracy wanders the aisles and thinks:

“I can’t believe this is happening to me.”

Feeling something, anticipating nothing

Three days earlier, on Wednesday, Sept. 19, before that day’s first surgical case, Tracy gathered her gumption. She knew she needed to say something.

Six weeks earlier, she felt something in her left breast.

But what she felt didn’t feel like the textbook “round, marble shape.” It was more “undefined.” Perhaps dense breast tissue.

After weeks of self-examining, turning over in her mind what it could be, Tracy decided to tell Dr. Michael Elrod, a breast surgeon at Kettering Health.

“I took a long time to convince myself I did feel something because it wasn’t the mass they teach you to feel for,” Tracy said.

She anticipated it to be nothing.

But Dr. Elrod wasted no time. As soon as his office opened at 7:30 that morning, he placed an order for a mammogram for that day. During the mammogram, Tracy’s confidence began to collide with confusion. “Can you even see what I’m talking about?” she asked the technician.

The technician showed Tracy a large white mass in the films and ordered an ultrasound. Tracy knew this was often a standard step. Two days later, on Friday, she went in for her ultrasound.

Nothing becomes more than something

“I wasn’t concerned at all,” said Tracy.

That Friday, Sept. 21, she stepped away from the ebb and flow of her work at Kettering Health Dayton to walk to the ultrasound department. She made no plans for Curtis, or anyone, to join. She planned to go from the ultrasound back to work.

After the ultrasound, the technician told Tracy she wanted a radiologist at the hospital to review the images remotely. Waiting in the ultrasound department, Tracy played the past few days back through her mind. She hadn’t told many people, including her mom, that she felt something. What was the point of bothering them over something that was likely nothing?

Her phone rang, bringing her back to the present. Dr. Meyers, a radiologist, informed her that the mass looked suspicious. He wanted it biopsied. To Tracy, everything still seemed routine, nothing more than protocol. Her curiosity, though, jumped ahead of protocol.

Dr. Meyers’s answer came through the phone with a characteristically straight-forward tone. “I’d be shocked if it’s not. I’m 90% sure.”

Protocol fell away from Tracy’s mind as it felt like the Earth gave way beneath her. Her mind raced, fixating on the faces of her three boys, her husband, her parents, her colleagues—her life.

What she hoped was nothing was more than something.

Dr. Meyers shared the results with Dr. Elrod, who ordered and performed a biopsy that afternoon. The following weekend, waiting for the results, everyone fixated on the unspoken 10%. Everyone, but Tracy.

She knew what was next.

Something has a name

Days of testing and meetings and waiting led to Sept. 26. Tracy met with Dr. Elrod, who had her biopsy results.

She had spent the past days steeped in and grieving a world of “What if?” So, when she heard that the biopsy tested positive for malignant cancer, “I barely cried because I already knew it.”

She had invasive lobular carcinoma. Something now had a name.

Tracy, at 35 years old with no immediate family history of breast cancer, knew what she wanted: a double mastectomy, removal of both breasts.

Having seen breast cancer patients return with recurrence after having had surgery, “I didn’t want any breast tissue left for that.”

They scheduled her surgery for mid-October. Coworkers asked Tracy if she wanted to go home. Instead of going home, she walked upstairs and scrubbed in for her next surgery.

When something threatens everything

Tracy approached the day of her surgery—Oct. 17—as optimistically as one could. “I thought I’d have the surgery, and then have meds for five to ten years,” said Tracy. Though her cancer was malignant, Tracy envisioned this as more of a benign experience, a “blip” in her life.

During surgery, Dr. Elrod biopsied three lymph nodes under Tracy’s left arm, a procedure called “sentinel node biopsy,” to check for cancer cells. One came back positive. So, he removed more, sending 11 to be tested.

Tracy recovered at Kettering Health Dayton the next three days. During recovery, she learned that of the 14 biopsied lymph nodes, 5 tested positive. The cancer they found in her breast might very well be invading the rest of her body.

The something she thought might be nothing weeks before now threatened everything: her job, her friends, her family.

Cancer would no longer be a benign “blip.” And stopping it in its tracks would require months of the most aggressive chemotherapy and radiation treatment.

And Tracy was willing to stop at nothing to protect everything.

On November 13, Tracy began a 20-week chemo regimen. Pink #teamtracy shirts became a common sight at the Kettering Cancer Center. The pink shirts she saw at Walmart weeks before had now become part of her world.

A sea of pink once again engulfed Tracy. But this time, it was the waves of support from friends and family, and especially her coworkers.

“They held a fundraiser. They sold everything from shirts and baskets and food. The Grandview Medical Center Foundation sold shirts in the gift shop. Everyone at Grandview was amazing to me.”

Surrounded by support, for 20 weeks, Tracy gave her everything—her hair, her energy, her optimism, her strength—to push against cancer’s advance. She, like every cancer patient, knew the stakes.

“I remember being in treatment and going to my kids’ football games and thinking, ‘I might not be here next year.’”

Leaving Kettering Cancer Center, wearing a pink #teamtracy sweater, Tracy felt the breeze and a possible future beyond cancer’s shadow. She’d come a long way since Sept. 19, 2018. And she had a long way to go still: breast reconstruction in April, four weeks of radiation, and a hysterectomy in the winter of 2020.

Saying something, changing everything

Today, at first glance, nothing about Tracy indicates a cancer-invaded past. She walks the halls of Kettering Health Dayton, or the aisles of Walmart, her long brown hair pulled back, with an eager confidence, like she knows a secret—something about life many others don’t know.

Her laugh, as she talks with colleagues or plays with her three boys, floats with the buoyancy of someone who’s faced a giant and won.

Even internally, she has “no evidence of disease,” no footprints of cancer’s silent attempts to break into her life.

Perhaps the only indication, other than the occasional #teamtracy shirt, might be her passion to encourage women to know their bodies and to trust their judgment.

“There’s a misconception that you’re going to find this hard, round shape if there’s something to be concerned about. But it doesn’t always feel like that. I’ve learned I can say, ‘I know my body the best.’

If you think something is wrong, it’s better to get it checked and find you’re wrong.”

Had it not been for her speaking up, Tracy knows how different things might look in the hallways of Kettering Health Dayton, at the sidelines of her son’s football games, and in her family’s photos.

“If I hadn’t said something, I would have been one week away from stage IV.”

But she did say something. And for her and her family, it changed everything.