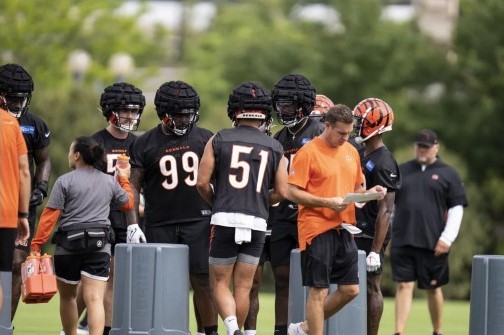 Bengals fans have huddled under the summer sun the past two weeks to watch Bengals training camp. And this year, fans have noticed their favorite players wearing new equipment.

Many Bengals players have been wearing a layer of black pads over their helmets. The padded shell, called a Guardian Cap, is new for the team and the NFL. With its odd design, the Guardian Cap reduces the impact of collisions by 10%, reports the NFL, 20% if both players are wearing the cap. It’s a small percentage, but a big deal when it comes to protecting players.

After August 21, players can choose to remove the cap, which is part of a league-wide study. While their odd appearance brought new attention to training camps, the Guardian Caps also put more attention on the risk of concussions—for both professional and student athletes.

Concussions occur more often than people think. Of the sports with seasons starting in the fall, football and soccer account for thousands of concussions every year.

More than being “knocked out,” a concussion occurs when trauma to the head affects someone’s mental status. An unexpected hit from a linebacker may seem the most likely to cause a concussion, but they can also happen when a soccer player uses their head to send the ball into the net. Parents and coaches should remain attentive to student athletes practicing or playing, watching for any changes after any contact to the head.

“Parents can pick up on objective changes in personality that might otherwise go unnoticed,” said Athletic Trainer Robin Lensch.

Concussion symptoms can show up right after the injury, or they may not appear until days or weeks after. If a student athlete is hit in the head, parents should look for signs, such as if their child

“If a concussion is suspected during an athletic activity, the injured athlete should be removed from play immediately and referred to a qualified healthcare provider for additional evaluation and management,” said Lensch.

As any parent of a student athlete knows, keeping them from the sport they love is difficult. But after having a concussion, they need to rest—and not just from training and taking to the field. They need to limit activities that require heavy concentration. This includes taking tests, work tasks requiring intense focus, and using the cell phone or watching TV. And when it comes to returning to the field, Lensch shared that “the athlete should not be allowed to return to play until evaluated and cleared by a qualified healthcare provider.”

Parents also need to inform their student athlete’s coach of any concussions, including before any future seasons or joining any new teams.

“Each new concussion creates a greater susceptibility to another one,” said Lensch. “It’s imperative that coaches know about all concussions, even from other sports.”

Seek medical care for signs of a concussion

Find the nearest Kettering Health emergency center to you