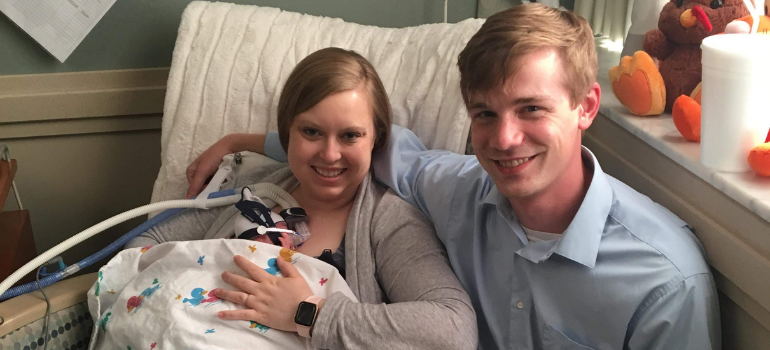 The birth of your baby is a joyous occasion, but what happens when that baby is born early and needs extra care to be well? The neonatal intensive care unit [NICU] is there to care for premature newborns until they’re healthy enough to go home.

The O’Brien Family struggled with infertility for several years. They suffered through miscarriages and rounds of IVF to conceive their son, Lucas.

“While we were there, the nurses who worked with us in labor and delivery were just phenomenal and touched my heart so much as well,” Emily said. “I can’t say enough about the nurses we worked with at Kettering, they were phenomenal.”

Lucas’s stay in the NICU

Emily finished surgery and was able to visit the NICU that night. A nurse who was there at delivery, Bethanie Shepherd, helped Emily make skin-to-skin connection with Lucas. However, Emily’s hands were too swollen, and she got overheated from her medication.

Emily recovered from her surgery and was sent home with her husband. Lucas stayed in the NICU for three months.

“Going into that experience, your baby is so small and fragile. It is everything you ever hoped and dreamed for, inside this tiny, plastic box. There is nothing you can do to help them from a parental standpoint,” Emily said. “You have to put your baby’s life in the doctor’s hands, but so much more in the nurse’s hands.”

They placed Lucas on a ventilator and his parents came into the hospital to visit him. Emily attempted to do skin-to-skin contact with Lucas but was still tired from her own recovery. Bethanie stayed with Emily as she held Lucas.

“She was the first nurse there that went out of her way to connect with me and make me feel so welcomed and loved,” Emily said. “It was clear she cared about my son, but it was also clear that she cared about me.”

Bethanie was with Lucas from delivery and was his primary nurse for most of the days she worked.

“It was such a beautiful relationship between my son and her,” Emily said. “She is phenomenal. This is not the path I would have ever wanted in my life, but God placed the right people there along the journey to make it possible.”

After being with Lucas from the very beginning, Bethanie was beyond happy to see him graduate from the NICU. She considers the O’Brien Family the best assignment she’s had since being a NICU nurse, since she got to see the whole journey unfold.

“I love getting to celebrate their discharge and watch the families go home together,” Bethanie said. “We get to see the miracles that people don’t get to see every day.”

When Lucas left the NICU, Emily felt a combination of emotions. He came home self-reliant, without the interventions of oxygen or feeding tube, yet, Emily still felt some fear to be taking him home after he had a team taking care of him.

“It was terrifying, because he had this team that was taking care of him night and day,” she said.  “Suddenly, we’re taking him off the wires and machines that tell us what his heart rate is. Now we have to trust that we can look at him and tell he is okay.”

Although it was exciting to take their baby home, it was also bittersweet to leave the nurses who had become important to the family.

“Those nurses and therapists became our friends.” she said. “That was our family,”

Impact of the NICU

The O’Brien Family was impacted by the NICU in several ways. Ultimately, Emily credits the NICU with saving Lucas’s life and helping her become a better mother.

What They Need You to Know: Life on COVID's Frontlines (Again)

Answering Your Questions About Prostate Cancer in African American Men