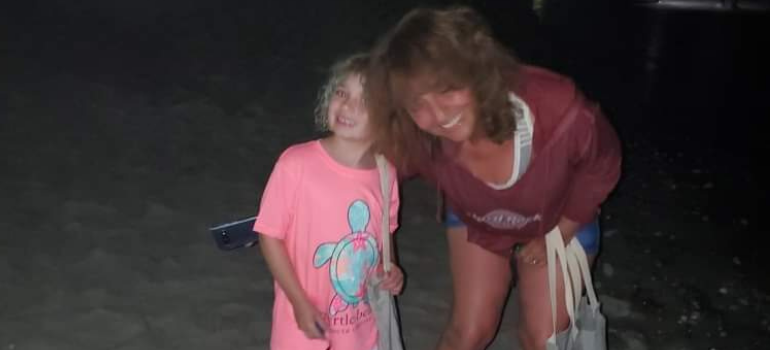 “One day I’m a woman going to work, next day I’m in an ICU thinking Ronald Reagan is president,” Jo Ann says. “I don’t even remember it happening. I didn’t feel good, I was sleeping a lot. I got up one morning and thought, ‘I’m going to go to work today, I can’t miss another day.’ The next thing my husband hears is me crashing through the bathroom.”

The doctors started her on antibiotics right away. She stayed in the ICU for 10 days. When she returned home, she had to be watched by family members, as her seizures continued.

“I couldn’t be trusted to cook alone. My youngest son was five at the time, so we both needed the babysitter,” Jo Ann says.

When the viral herpes encephalitis first occurred, Jo Ann was seizing repeatedly until she got prescribed antibiotic and anti-seizure medication in the ICU. After returning home she experienced seizures two-to-three times a week.

Jo Ann spent years trying to manage her condition through different medications,. Eventually, Jo Ann made the difficult decision to proceed with surgery to improve her disorder.

As time went on, Jo Ann tried different medications, but she didn’t like the side effects and was still seizing regularly. She switched between neurologists until she finally ended with Dr. Rajinder Pal Singh as her doctor.

Jo Ann wanted to be off her seizure medications, so Dr. Singh recommended she try surgery to improve her condition.

Despite being her first surgery related to her seizure disorder, Jo Ann was not nervous and instead was excited by the possible life that awaited her afterward.

“I was ready to do this surgery and get it done with,” Jo Ann says. “I want my life back. I want to be that woman working 50 hours a week and fighting traffic going back and forth to work. I also don’t like the medication’s side effects. So, I thought, let’s try this.”

In March of 2020, she underwent right selective laser right temporal amygdalohippocampectomy. This surgery removes the hippocampus and the amygdalae from the brain, with the hopes of treating the seizure disorder.

Jo Ann considers the surgery to be a success and has seen improvements to her condition post-recovery.  However, she is still being treated with seizure medication even after her procedure.

Jo Ann is still recovering, but she has already seen improvements in the months since March. Since the surgery, she has only had three or four convulsive seizures.

She has had several non-convulsive seizures, which can still be detrimental to her health as they are characterized by a brief loss of consciousness. However, she has had fewer of both types of seizures since her procedure.

“I’m still recovering from the surgery. Some days are better than others,” she says. “The surgery itself I believe was a success, I honestly do. Would I recommend for someone to try the surgery? Put some thought into it and consider what you’re getting into.”

Jo Ann has also seen improvements in her everyday life since the surgery. She has noticed things like her memory being better and even feeling more like her old self.

“Certain things are better, absolutely. I can now remember my address—I couldn’t remember numbers,” she says. “I don’t walk away from the stove with things still on it, like I did when my short-term memory was so bad. Now my husband allows me to cook when he’s not home.

“He was willing to try different medications. We’ve done extremely well compared to what I was doing previously,” Jo Ann says.