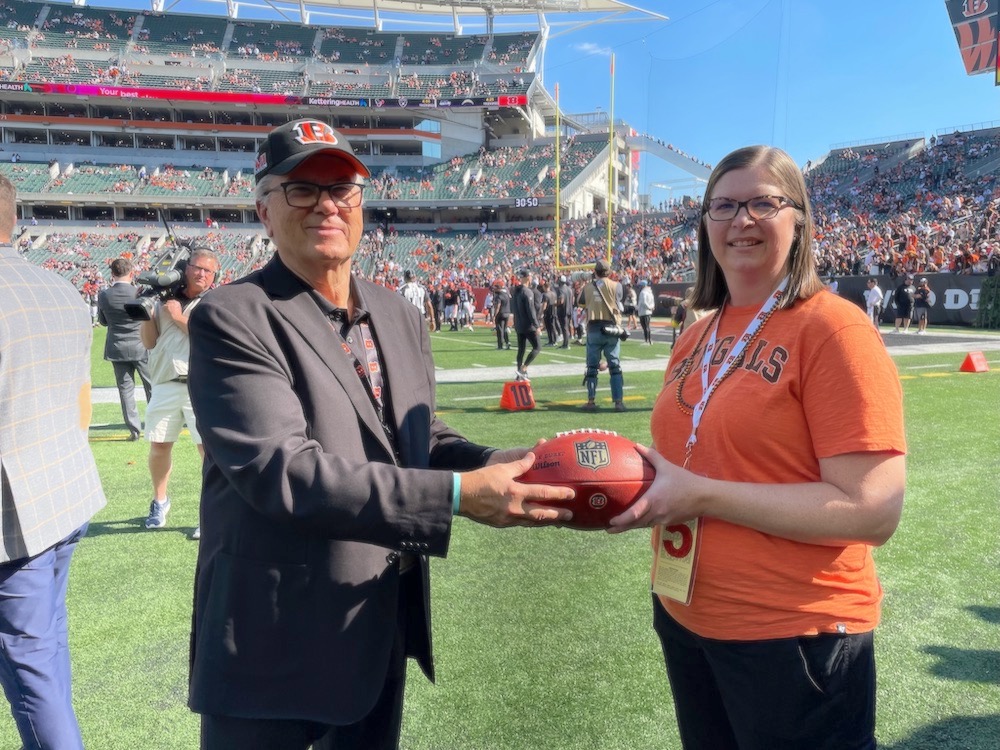 “Calm down; it’s probably nothing. Give it a few days.”

These were the words Kelly Long used to reassure herself when she woke in the middle of the night with a pain in her chest. Was it a pulled muscle? Something that happened when caring for her two children?

She felt around the area where she was hurting, and it didn’t feel quite right—like a thickness that wasn’t supposed to be there. Knowing everything seems worse in the middle of the night, Kelly decided to monitor it, but maybe it wasn’t time to worry quite yet.

The pain in her chest began to ease, but that thick feeling lingered. About a week later, Kelly knew she needed to get in touch with her doctor.

“My doctor said it didn’t feel like your typical lump per se, but to be on the safe side, we should do a mammogram,” Kelly said.

This was new for Kelly—since she was under 40, she didn’t have regular mammograms. After her appointment, they found something.

The suspicious mammogram led to an ultrasound, which led to a biopsy. In August 2018, when the biopsy results came back as malignant, Kelly learned that she had breast cancer.

At stage 3, the cancer had made its way to the lymph nodes, but a PET scan revealed that it hadn’t spread further—a bit of good news hidden in the bad.

“It was a huge relief and a milestone,” Kelly said. “Once they knew it hadn’t spread, we could talk about a treatment plan.”

Gearing up for the fight

Dr. Roxanne Weighall, the breast surgeon, and Dr. Heather Riggs, the oncologist, came up with a plan.

As one could imagine, Kelly’s first appointment was overwhelming. But with the planning and coordination taken care of, she could use that mental space to process what she’d just learned.

“From the time that I was diagnosed to Kettering Cancer Care taking over my care, they moved so fast,” Kelly said. “It felt like a well-oiled machine. They had the urgency that I would want and expect. It never felt like I was going to slip off the radar.”

Kelly was HER2 positive, which means she tested positive for a protein that promotes the growth of cancer cells, making the cancer spread quickly. Because of this, Kelly started with intense chemotherapy—the kind that makes you feel sick and lose your hair.

Knowing the side effects would take their toll, Kelly was happy to have a comforting place to receive treatment.

Between the snacks the volunteers brought around, the goodie bags from Xenia High School students filled with coloring books, a soft blanket, and things to pass the time, Kelly found herself thinking the experience was actually nice.

At least, as nice as chemotherapy can be.

Kelly was on four chemo drugs in total, and the two “bad” ones with the problematic side effects ended first. She continued the other two for almost a full year in conjunction with radiation. In January 2019, she had a double mastectomy.

The simple things and the big things

Kelly’s journey inspired her to pause and appreciate the simple things.

During her experience, she reveled in the “normal” she could maintain in her life—continuing to work and care for her children.

“If I had the luxury to take time off, it almost would have been worse,” Kelly said. “The kids, my job, life in general—it was a nice distraction from treatment and the way I was feeling. It made it harder, but at the same time anchored me back to the life I was living.”

The simple things helped, but the big gestures meant everything.

“There was a mom in my daughter’s class who coordinated a meal train when I had surgery,” Kelly said. “I didn’t even know her very well—she just wanted to help out.”

She was deeply moved by these acts of kindness, but of course, the support from her family and friends carried her through her journey. With understanding co-workers, friends who had been through the journey she was on now, and love from her husband and larger family, there was always someone giving Kelly strength and support throughout her treatment.

Kelly is used to playing superwoman: doing it all and never needing to ask for help.

“This experience taught me to some degree, you have to let people help you, and it’s OK not to do it all yourself,” Kelly said.

Now, she’s happy to finally get back her sense of normal.

“Now my kids can feel like their mom’s OK. It’s so nice that they don’t have to worry,” Kelly said. “You never realize how strong you are until you have to do something like that.”

And while much of Kelly’s story focuses on the normal, she’s had some excitement too. On October 23, 2022, Kelly had the chance to deliver the game ball at the Cincinnati Bengals’ Crucial Catch game against the Atlanta Falcons.

A major Bengals fan and cancer survivor, this opportunity gave Kelly the chance to celebrate.