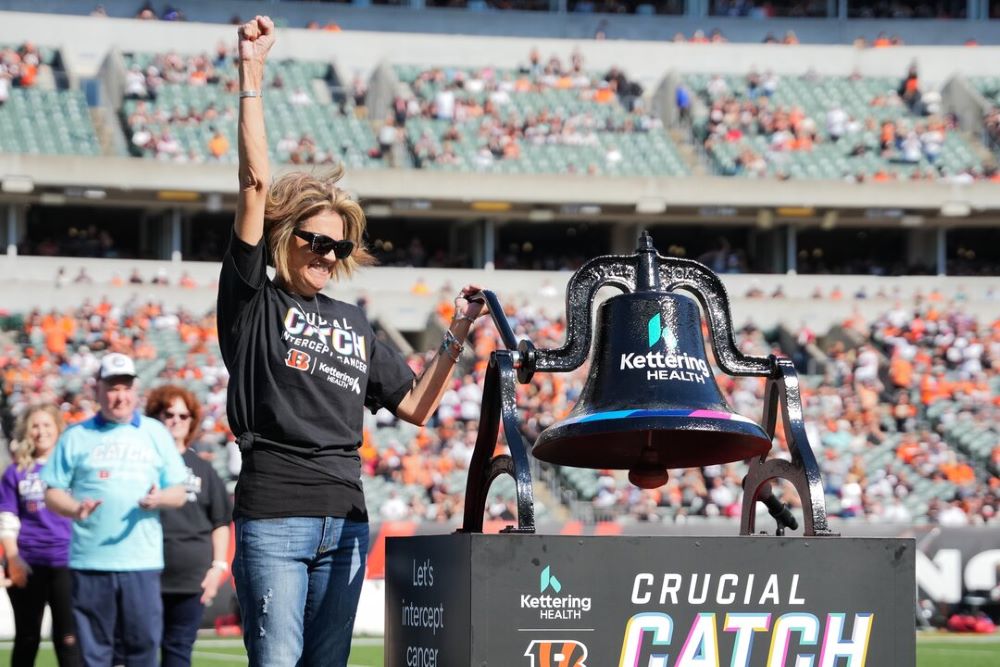 The sun shone brightly on Paycor Stadium on an uncharacteristically warm mid-October day. But the higher temperatures didn’t stop many attendees from experiencing goosebumps.

On Sunday, October 23, the Cincinnati Bengals faced the Atlanta Falcons, but this game was about more than football. The message during the Bengals’ Crucial Catch game rang clear: the cancer community is strong and full of support—and there is hope in early detection.

“As someone who works with cancer patients every day, the hope is that the faster we can catch cancer, the faster we can start working toward your needs: ‘how can we help you through this,’ ‘what treatment do you need,’ ‘what does your medication cost look like?’ Crucial Catch is crucial because it’s life-altering,” said Jami Holbrook, medication assistance counselor for Specialty Pharmacy as part of Kettering Health Cancer Care.

Jami, known among her community for her singing voice, was invited to sing the national anthem at the game.

Throughout the day, Kettering Health and the Bengals honored those impacted by cancer: those who have won the fight, those who are currently fighting, and the legacy of those who have passed.

As fans entered the gate, they posed with “I Celebrate” signs, giving them a chance to support a survivor or share their own journey with cancer. Fans were also encouraged to post these signs on social media, sharing their support with those not at the stadium.

The Crucial Catch game was an inspirational moment for not only those at the stadium, but also people everywhere impacted by cancer.

Early detection is the best defense against cancer.