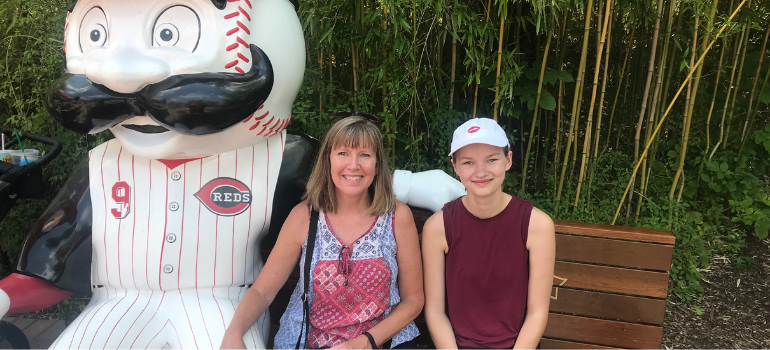 Carol Cooke, APRN-CNP, believed she knew what to expect when giving birth to her first child.

“I thought I knew it all,” she admits.

As a professional, Carol had a decade of experience as a labor and delivery registered nurse, plus an additional year and a half as an OB-GYN certified nurse practitioner. As a new mom, Carol had a perfectly normal pregnancy. She even went into labor during—appropriately enough—Labor Day weekend.

That’s when unforeseen developments turned an ordinary pregnancy into a traumatic delivery.

Carol’s contractions, sporadic at first, started about 3 p.m. on Sunday afternoon. “My contractions didn’t feel like anything any of my patients had ever described,” she says. “It was more of a stabbing pain. I thought it would be more like a menstrual cramp.”

Around 8 p.m., Carol went into active labor. At one point, while standing bent over the back of the couch, she said to her husband, “I didn’t know it was going to hurt this bad.”

He said, “You worked labor and delivery for 10 years and you didn’t know it was going to hurt?”

“I didn’t know it was going to hurt like this.”

The long ride to the hospital

Carol lived north of Cincinnati and planned to deliver at a hospital in northern Kentucky. But it was Sunday night of the holiday weekend—when Cincinnati’s huge annual Labor Day fireworks celebration takes place on the Ohio River.

“We took a big loop, so we had a longer drive than we normally would have had,” she says. “I found out it was difficult to sit in the car in active labor for 45 minutes.”

At last, they reached the hospital. “It’s a hospital that I had worked at as a labor and delivery nurse,” Carol explains. “So everybody was a good friend of mine, and that was very comforting.”

Carol was admitted, and the wait for full dilation of her cervix began.

About 1:30 a.m. on Monday, Carol told her husband that if she hadn’t made any progress by 2 a.m., she would ask for an epidural. “Five minutes later, my nurse friend walked in. I got my epidural, and the rest of the night was pretty uneventful.”

“The baby was asynclitic, which means she just wasn’t quite straight,” Carol explains. The baby was coming out positioned correctly—headfirst and facedown—but her head was tilted and the top of it wasn’t centered on the cervix. “So that made it a little more difficult.”

The physician tried using a delivery assistance vacuum a couple of times, but that didn’t work. “I knew it wasn’t going well,” Carol says.

Another physician was called in to help. He reached in and corrected the baby’s position. Carol’s physician then used forceps to deliver her baby girl. At 8 pounds, 13.5 ounces, her size had also contributed to the difficulty of her delivery. Carol later learned that during her ordeal the medical team had set up for a C-section in case the situation came to that.

“They took my daughter over to the warmer, and my husband went over,” Carol recalls. Thankfully, their new daughter—Maddie—was healthy and fine.

Carol, on the other hand, started to not feel well.

“I looked over [at the monitor]. My blood pressure was going down and my pulse was going up, and I thought: I’m going into shock.”

Despite her exhaustion and lightheadedness, Carol’s years of medical training and experience kicked in. “I lowered the head of my bed—because that’s what a nurse does when patients are going into shock,” she says with a laugh.

“The nurses were right on it,” she adds.

Carol had lost a lot of blood during the delivery, a result of the vaginal tearing and the incision made to aid in delivery, called an episiotomy.

“I had a midline episiotomy with a third-degree tear,” she explains. “A fourth-degree would be the worst, so I was very close.”

The first time she tried to get out of bed, she nearly passed out. Carol’s husband helped her while the nurse remade her bed with fresh sheets.

“It took me at least two days to get around without being really lightheaded,” Carol says. “And much longer to feel normal.”

Carol says that in some ways—such as recognizing she was going into shock—her specialized medical knowledge was beneficial, but that in other respects, “Ignorance would have been bliss. My husband had no idea how bad it was. What was very helpful was that the nurses were my very good friends for so long. I knew that they were going to do everything they could for me and my daughter.”

The second time around

Several years later, as Carol was in the final weeks of her second full-term pregnancy, the memories of her daughter’s difficult birth were still with her as she prepared for the arrival of her son.

“I was very anxious about going into labor with him, anticipating a repeat performance,” she says.

Her obstetrician was Dr. Robert Little one of her Kettering Health colleagues at Oak Creek OB-GYN. He scheduled an induction for her due date.

Carol recalls that when she arrived at Kettering Medical Center at 5 a.m., “I jokingly said to the nurses,

‘When you check me, tell me I’m 5 centimeters dilated.’ That way I’d be halfway done, and we hadn’t even started yet.”

They checked and said, “You’re 5 centimeters.”

“Yes, you’re really 5 centimeters. Let me know when you want your epidural, and I’ll break your water.”

Carol told them to go ahead. “I’d had enough pain that first time—I did not need to do it again.”

They administered the epidural and broke her water. “This time I knew what my contractions felt like,” she says. “So knowing my contractions were going to be more like a sharp stabbing pain than a menstrual-cramping pain made it much easier to tolerate.”

She quickly progressed to completely dilated.

“I pushed twice, and Dr. Little said, ‘Do you care if I do an episiotomy?’ I said, ‘I don’t care what you do as long as it’s not like last time.’ So he cut the episiotomy, and then he said, ‘cough.’ So I coughed and delivered my son.”

The baby weighed 8 pounds, 3 ounces. “He was only 10 ounces smaller than Maddie, but it was dramatically different.”

“I tell patients it’s OK to mourn what you thought it was going to be, but let’s focus on the healthy baby you have at the end. So, whether it comes out natural vaginal–no anesthesia, or a C-section, we’ve accomplished the goal we set out for.”

She adds that relating her own experience is especially helpful with her patients who have had a traumatic delivery, are pregnant again, and are anxious. “I share a lot of my personal story with my patients, letting them know that it’s not necessarily going to happen a second time. That it’s OK to feel anxious about that, but to not expect it to be exactly the same.”

Katie Couric: Never Too Late to Schedule Your Mammogram