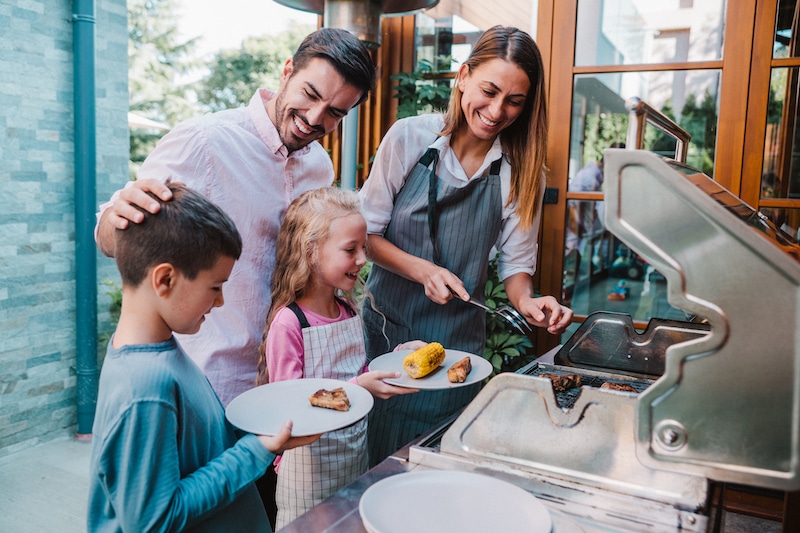 While Labor Day traditionally signals the end of summer, summertime weather lingers longer—so if you’re planning to celebrate the holiday with a family cookout, you need to continue safe grilling practices to avoid foodborne illnesses.

Need a refresher on warm-weather food safety? Follow these guidelines from the U.S. Department of Agriculture and Alicia Buterbaugh, registered dietician with Kettering Health.

Start with a clean grill.

Remove charred food from the grill before cooking to reduce the risk that fresh foods will be exposed to bacteria.

Keep meat, poultry, and fish in the fridge until you’re ready to grill, then take out only what you’ll cook right away. Keep cold side dishes refrigerated until serving time.

If you’re using a cooler, Alicia advises packing raw meat away from other items. “Make sure they are well separated so that there’s no cross-contamination,” she says. “Also, keep the cooler out of the sunlight and try not to open the lid more than you have to.”

Use a food thermometer.

This ensures that you’re cooking meat, poultry, and fish to a high enough temperature to kill bacteria. Cook whole cuts of red meat, like beef and lamb, to 145 degrees, and then let it rest for three minutes before serving. Cook fish to 145 degrees, hamburgers and other ground beef to 160 degrees, and poultry to 165 degrees.

It may be tempting to use the leftover marinade on the food after it has been cooked. But that’s risky—the marinade may harbor harmful bacteria from the raw meat that was soaking in it. “You really should discard that marinade,” Alicia says. But if you don’t want it to go to waste, the USDA advises bringing it to a full boil before reusing it.

“Keep hot foods hot and cold foods cold,” Alicia says. “There’s a danger zone for food: 40 to 140 degrees Fahrenheit. Foods should be in that zone for only a minimal amount of time—no more than two hours.”

Food safety and nutrition go beyond your Labor Day luncheon.