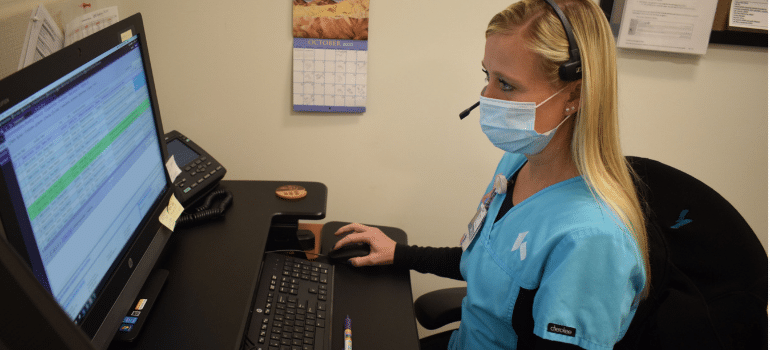 Mammogram callbacks can be stressful and make a patient fear the worst, but additional screenings are ordered for many reasons.

A callback does not automatically mean breast cancer. It simply means the radiologist found something they want to further investigate in the breast on the screening mammogram.

What is a callback?

According to Susan Brake, manager of Kettering Health Breast Centers, a callback means a woman had a screening mammogram and a potential abnormality has been found. The patient then needs to have additional imaging performed.

“When the radiologist interpreted that original screening mammogram, they saw either a change from the previous mammogram or they saw something new, and they want to take a closer look,” Susan said. “That results in the patient getting called back for additional views and sometimes an ultrasound.”

About 10% of screenings result in a callback, but it can cause anxiety when it happens to you. Imaging Patient Navigator Tawnya Lochner tries to reassure the women she talks to and put them at ease while they wait for needed answers.

“I don’t think the patient should worry when she gets a callback—she’s in good hands,” Tawnya said. “We will get her back as quickly as we can to give her answers.”

As part of her job, she reads the radiologists’ recommendations and helps the patient understand what was seen in the mammogram and why she needs to come back for a diagnostic mammogram and possibly an ultrasound.

“It does not always mean cancer, but that is what we are trying to make sense of,” Tawnya said. “Sometimes it requires additional imaging to decipher if it is potential cancer or not.”

When the patient returns for her callback, the technologist will only compress over the area in question. This gives them a better look at what was originally noted as potentially problematic.

The patient will receive her results on the same day as her callback appointment before she ever leaves the facility. She will leave that appointment knowing her next steps, which can consist of a biopsy, follow-up in six months to a year, or a return to her normal screening schedule.

If not cancer, then what?

As hard as the technologist tries to compress the breast evenly, that does not always work. This can result in an area that looks different to the radiologist and show a potential change.

Calcifications are one reason a woman might be called back for additional testing. These can show normal in the breast, but they can also function as an early indicator of breast cancer. When seen in the breast as new or changed, radiologists know to look closer.

“There are things other than cancer that are detected in the breast. It depends on what they’re looking at. We just need to get her back as soon as possible and get her answers,” Tawnya said.

The biggest thing that can help at these callback appointments is a history of mammograms, which gives the radiologists images to look back on and compare for changes.

“Every year that you come for your mammogram, the radiologist is comparing what you had in the past. The slightest change will not be taken for granted. We will bring you back to take a closer look and that is why it is important to have a history,” Tawnya said.

For women getting their first screening mammogram, callbacks are more frequent. Since there are no prior images to compare the mammogram to, the radiologist may need to get several views to be sure everything is fine.