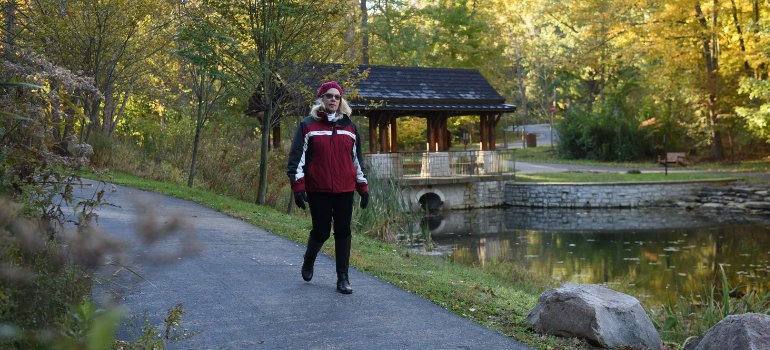 With 30 years in the classroom under her belt, Pam Genson had no problem running her business classes until her last year of teaching.

Pam had a torn meniscus in her right knee, which made it difficult for her to make her way around the classroom, including when she was recovering from the surgery she had to repair it. She completed that last year of teaching but still had trouble walking.

This prompted her to go back in to see Frank Fasano, MD, a now-retired orthopedic surgeon with Kettering Health, about her pain.

“I was convinced it was a knee problem,” Pam says. “Dr. Fasano seemed to know right away that it was my hip.”

Her hip was X-rayed, and 10 months after her meniscus repair, Pam was scheduled for an operation to replace her left hip.

“I was pretty apprehensive,” she says. “I had heard of meniscus repairs before, especially working in schools, but I didn’t know anyone who had a joint replaced.”

Despite feeling nervous, Pam arrived at Sycamore Medical Center for her joint replacement surgery and was immediately at ease when she saw a past student of hers accompanying her anesthetist.

“What was comforting—to see a familiar face when you’re in that place of uncertainty,” Pam says. Her trust only grew as she received world-class care in a facility that felt like a neighborhood community.

Pam has now had her other hip and her knee replaced—all part of the effort to relieve her symptoms.

“The promise of being able to walk again without pain was the motivator,” Pam says.

Today, Pam’s surgeries are rarely in the forefront of her mind, as she no longer has the pain to remind her.

“Previously, I had learned to live with a certain amount of pain, but it got to a point where I needed to do something,” Pam says. “In each case, I went in seeking relief from pain and improvement in my ability to walk, but today I can do pretty much everything I’ve wanted to do.”

Pam goes on walks and works in her garden and was even able to attend her daughter’s wedding in three-inch heels.

“The people I knew before the surgery, they’ve seen me hobbling around with a cane,” she says. “Now they tell me I don’t walk like I’ve had surgery. I think that speaks volumes.”

If you’re in need of orthopedic care, trust Kettering Health to help you achieve your goals for better health. Call 1-877-930-9354 or schedule an appointment with one of our orthopedic surgeons.