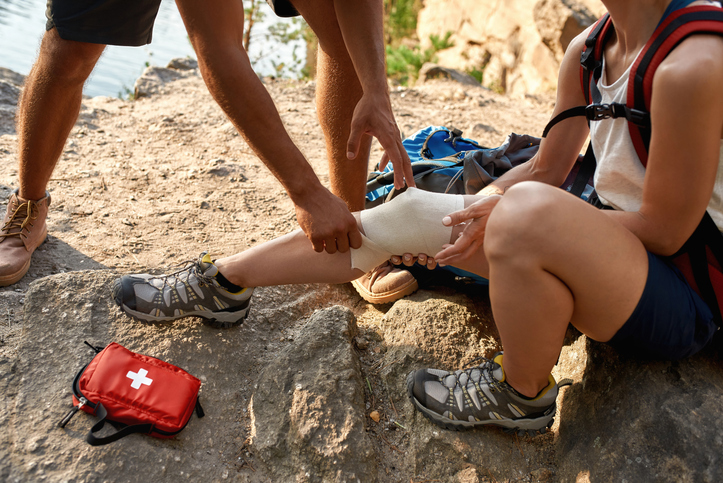 You may be well-versed in covering a pesky paper cut with a bandage or running a minor burn under cold water—we all experience small injuries from time to time. But if someone is severely injured, do you know what to do?

If the injured person is bleeding excessively or not breathing, call 911 yourself or designate a specific person to do so.

Check for breathing and pulse

“The first thing you want to do is check to see if they are breathing okay,” says Laurie Narigon, BSN-RN, CEN, TCRN, injury prevention coordinator for the trauma program at Kettering Health.

If the injured person appears to be struggling to breathe, reposition them so that their chin is tilted up and their airway is open.

“You do need to be careful if they have had some sort of traumatic injury to their neck, but if they aren’t breathing, that has to be the top concern,” Laurie says.

If you don’t detect breathing or a pulse, start CPR immediately if you know how.

It’s important to assess the injured person for severe bleeding—and quickly. Without intervention, serious bleeding can become a life-threatening condition in as little as two to three minutes.

Look for blood that appears to be spurting or pumping or that keeps coming out steadily. Other signs of major bleeding include blood from the wound soaking through clothing or bandages or pooling beneath them, and the person acting confused or losing consciousness.

While waiting for help to arrive, do what you can to intervene with the bleeding. Take any “clean” cloth (the cleanest thing within your reach) and use it to apply pressure directly to the wound. Press your hands on the wound and lean as much body weight as you can directly over it.

If you have a tourniquet available and the wound is located on the arm or leg, apply it above the elbow or knee joint, at least two to three inches above the wound. Do not attempt to use a makeshift tourniquet.

“Sometimes there’s a real misconception about tourniquets. Things like belts are almost never effective. If you don’t have a proper tourniquet, you’re better off using the direct pressure,” Laurie says.

Even if the wound does not have any characteristics of a life-threatening injury, it’s still important to properly care for it to avoid infection.

Start by washing out the wound with soap and water if it’s available, but alcohol wipes will also do the trick.

“Get any dirt out of it or any kind of foreign object, like gravel,” Laurie says. “Make sure it’s clean.”

Next, apply an antibiotic ointment and bandage the wound to protect it. As far as whether you should reach for bandages or gauze, Laurie says don’t fret too much about the decision.

“The primary point of using a bandage is to keep the wound clean,” she says. “If it’s bigger or in an awkward position, sometimes gauze can be a better choice. It comes down to what’s going to best keep the wound covered.”

To learn all you need to know about using a tourniquet or packing a wound, host a Stop the Bleed class in your community. Contact Laurie Narigon to schedule.

How to Be More Comfortable During Your Mammogram

A Cancer Diagnosis Leads to Purpose