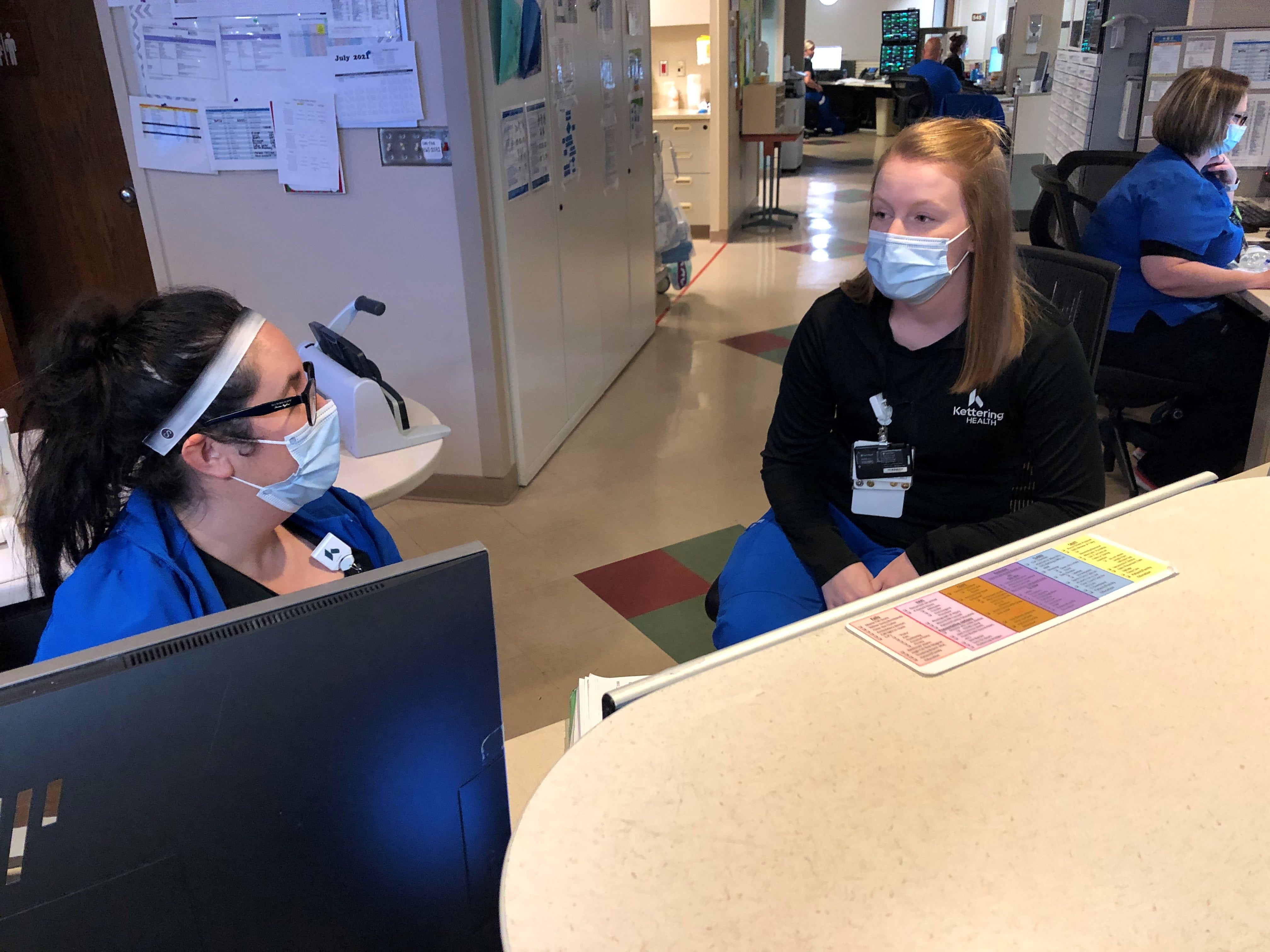 A 15-year-old girl walks the hallways of Kettering Health Hamilton, carrying textbooks. She walks in a room and hears a familiar voice.

Her grandmother had suffered a major heart attack.

She sits next to her grandmother, surrounded by beeping machines, and opens an anatomy book. She takes it in—the room, the noise, the nursing staff. This is what she wants to do.

She watches the nurses tending to her grandmother, treating her, helping her, connecting with her. Her grandmother brags to them, “Oh, my granddaughter is going to be a nurse.”

And that’s exactly what Rachel Baker did.

Becoming both a nurse and a neighbor

After graduating from nursing school, Rachel began her nursing career at Kettering Health Hamilton. She, like many of those who work there, she wanted to be where her family, friends, and neighbors all seek care. She wanted to give back to the community she’d called home.

As both nurse and neighbor, she is familiar with her patients. She talks to them. Calms their nerves. Assures them they’re in good hands. And she strives to make a connection.

“Even if it’s five minutes that I can spare just to sit and talk with them to learn about their family, what they like, learn about them, just taking that time to make them feel seen is nice,” she says.

“It’s helping them to feel seen and heard by you.”

Familiar with the ebb and flow of the hospital, she saw her patients, comforted them, and offered them support.

And then the world changed.

Navigating a world of isolation

COVID-19 arrived, and isolation became the new ebb and flow of life.

Hospital patients—whether they had COVID or not—were isolated. Their health, and their lives, depended now on distance rather than proximity. In pain and with their support systems behind glass walls or screens, they wanted only to go home.

After returning from maternity leave, Rachel began working the COVID floor. She had to wear head-to-toe personal protective equipment—her plastic armor. Connection between patients and others, suddenly, became nearly impossible.

“It was kind of a whole new world that I came back to after maternity leave,” she says.

Patients, especially those with COVID, looked for any sort of connection. They were sick—deathly ill in some cases—and they couldn’t hold their family members’ hands or look them in the eye. They wanted support, understanding, and compassion.

Rachel fought to make sure they had that.

Greg was one of Rachel’s first COVID patients.

Greg came to Kettering Health Hamilton with COVID-19 in early December. Days soon turned into weeks. Holidays came and went. And in January 2021, so did his birthday.

Traditions, memory making, family gatherings, all the things Greg loved, he saw pass by with each day he was recovering.

“He missed his family and his wife,” says Rachel.

After 40 years of marriage, Greg and his wife had rarely been a part.

“Once I learned he was feeling down—that’s where they start to give up hope,” she says.

She knew she needed to do something.

Rachel spoke to Greg’s daughter about coordinating a video chat. The family had been trying to FaceTime their dad but had been unsuccessful. Rachel committed to making this call possible.

What seemed like a simple task soon turned into an endeavor. But Rachel never gave up.

“The first iPad couldn’t connect. The application didn’t work,” said Rachel. “We needed to find a second one from a different unit for them to video chat.”

The call was only 10 minutes, but it was the first time he saw his wife and daughter-in-law in more than a month.

Greg was so happy to see his wife’s face, to see her and talk to her. It was the closest he’d been to home in weeks. And it began to help him recover.

The call gave him strength. He remembered what he was fighting for: getting home to his family. He knew he couldn’t give up.

“His whole mood changed. Seeing them brightened his mood,” she says.

Greg was discharged two week later. He returned home to his family and his wife.

Rachel fought for Greg, helping him connect with his family. She has always valued the power of connection—ever since she was a teenager, sitting in her grandma’s hospital room in Kettering Health Hamilton, watching those nurses do the same for her family.

“What my grandma would want.”

Before Rachel helped Greg and hundreds of patients like him, before she worked at Kettering Health Hamilton, she sat in a classroom at Miami University, preparing to take a nursing exam. That same day was her grandmother’s funeral.

The professor offered her an extension, but Rachel didn’t need the extra time. She was prepared, certain in her career choice, and ready.

When asked about why she didn’t want the extension, Rachel answered:

“I need to do this. This is what my grandma would want.”

Kettering Health Hamilton is proud to help its community and neighbors live their best.

Learn More About the Patient-Centered Care at Kettering Health Hamilton