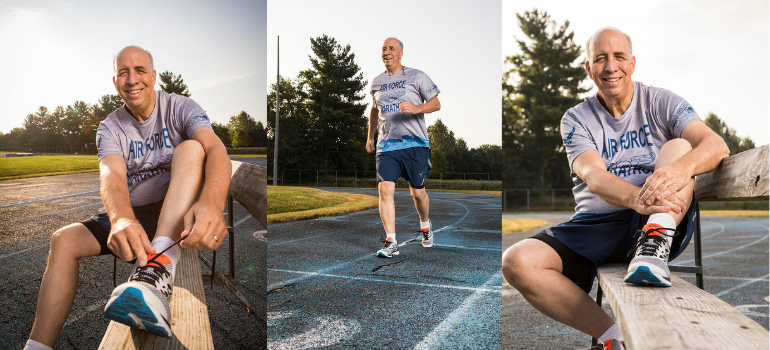 Ken Farkas remembers a lot from September 15, 2018. His alarm didn’t go off that morning, so he was in a bit of a rush to get to the Air Force Marathon.

When he arrived, he parked and stopped to take a photo of the lines of cars coming into the parking lot. The security line was long, so he changed into his running shoes while he waited. These particular details may fade from his memory over time, but what happened later will stick with him forever.

The sound of the gun jolted the crowd to a start, where Ken spoke to a friend as he began the race.

“Neither of us was feeling the best,” Ken says. “I remember telling him I hadn’t felt well all week and that I’d either do really well or not make it. Looking back, that was an understatement.”

Waking up in an ambulance

The nausea began to set in around the ¾-mile marker, where Ken vomited and noted that his arms felt uncomfortable. He drank some water and began to feel better, deciding to walk to the 2-mile mark and reassess how he felt. He passed an acquaintance and paused to take a photo with him.

“Looking at the picture, I looked OK—considering what was about to happen,” Ken says.

Just past the 2-mile mark, Ken grew dizzy and felt as if he were going to pass out. The next thing Ken remembers from that day is waking up in an ambulance.

After Ken passed out, he was initially assisted by four fellow runners who performed CPR until emergency medical services (EMS) arrived. The EMS personnel immediately took over and used an automated external defibrillator (AED) to shock Ken back to life. The EMS team then transported him to Soin Medical Center for further care, where it was determined that Ken had experienced a heart attack and had been in cardiac arrest.

His left anterior descending artery was 100% blocked, causing the heart attack, and a stent was inserted into that artery. Following the procedure, he was transported to the intensive care unit (ICU) to recover. It was less than 60 minutes from the time Ken passed out to when he was in the recovery room.

“The care provided at Soin—in the ICU and the other units I as on—was all phenomenal,” Ken says. “To be honest, going in, we had no opinion of Soin and so my wife was a little hesitant to have me go there. Now we are referring people to Soin.”

Once recovered, Ken went through cardiac rehab at Greene Memorial Hospital on the recommendation from a neighbor who had recently completed the program. Ken completed a regimen of cardio and strength exercises at increasing levels of endurance and intensity over more than 30 sessions.

“This gave me the confidence that I was able to safely exercise, and my life would return to normal,” Ken says.

“I was really reluctant because when I was done, I was like, ‘I’m fine. I don’t need anything.’ But I do. The folks there were fantastic. I got really good care there.”

Other than a tiny hole in his wrist from the IV, Ken has little reminder of what happened to him.

Preparing for the unexpected

As his affinity for running suggests, Ken had been a relatively healthy person. He started running in November 2015 with his first 5K on Thanksgiving Day.

Ken had felt faint in the past during exercise due to dehydration, and at first, blamed his symptoms during the Air Force Marathon on something similar. But this time was different.

“I learned regular exercise really helps me counter stress and keeps my blood pressure within normal limits,” Ken says. “If I do the 10K again this year, I’ll make sure I get plenty of rest and stay hydrated.”

As for his cardiac event, if it weren’t for fast emergency care, Ken may not have had access to the best possible outcome.

“I was truly blessed,” he says. “I thank God every day for all the professionals he put in place that day. It was a miracle!”

We take your heart health seriously.