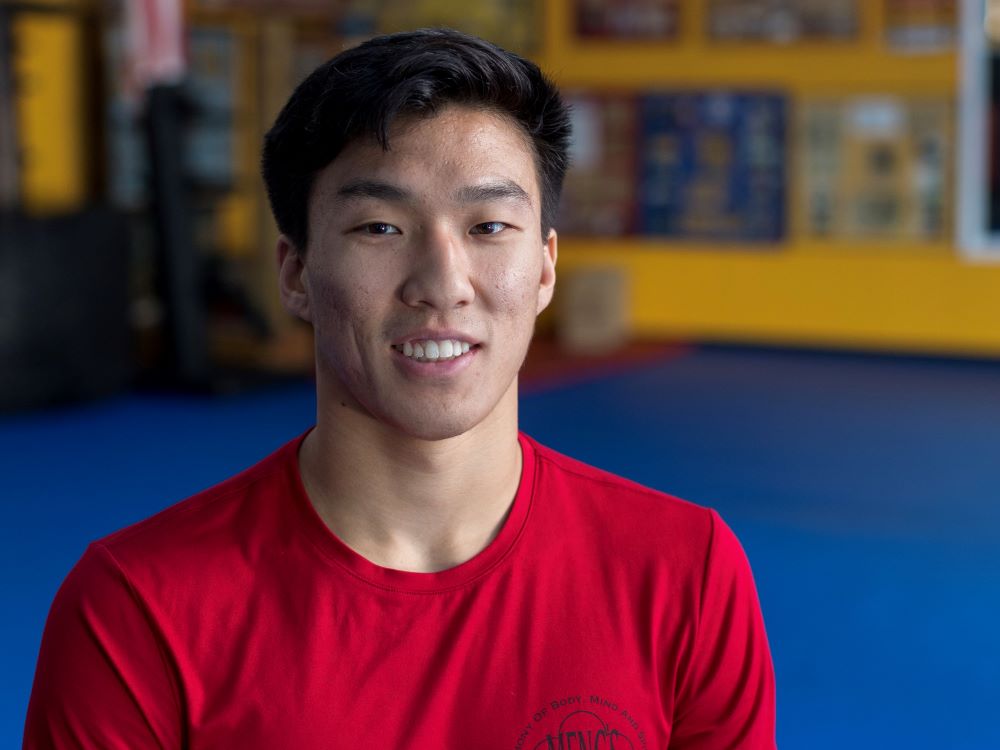 At three years old, Vincent Meng had one goal: become a Power Ranger.

The TV show inspired him to start martial arts training. He began competing before age ten, earning his junior black belt when he was seven. What started as a way to be like his television hero quickly became Vincent’s passion.

Before becoming the best, however, he had to learn from the best.

Vincent had more than the Power Rangers to inspire him. He comes from a family of expert martial artists. His mother and father both began training at a young age, as did other members of his family. His father started Meng’s Martial Arts in 1987, a network of over 25 international schools headquartered in Dayton.

It was at Meng’s Martial Arts where Vincent began his training.

“I’m grateful to be able to carry on this legacy,” Vincent shared.

Over the years, Vincent continued to improve and grow his skillset. In 2017, he won his first world championship in kung fu. This lit a fire under Vincent, and he set his goals higher.

In 2018, his junior year at the University of Dayton, Vincent belonged to four U.S. national teams, balancing homework with teaching martial arts and training every day.

“I remember studying on the plane for my final exams because I was traveling and competing,” he said.

A packed schedule didn’t stop Vincent, though. By the end of his junior year, he was a three-time world-champion martial artist in three different disciplines.

When Vincent noticed pain in his left shoulder in early 2020, he put it aside to continue competing. The pain wouldn’t going away, however, and Vincent knew a serious injury could keep him from achieving his goals. Not wanting the injury to worsen, he decided to see a doctor.

The road to Italy

Vincent saw Dr. Blake Daney, an orthopedic surgeon. An MRI showed he had torn his left shoulder in several places. Vincent knew rest wouldn’t fix it. He needed surgery. Surgery meant taking a step away from his passion, but not getting surgery could mean stepping away forever. Dr. Daney estimated that it would take around six months for Vincent to make a full recovery, understanding the importance of getting Vincent back in the ring.

“He showed not only initial interest in helping me recover, but he took interest in what I do,” he said.

Vincent had surgery to repair the multiple tears in his left shoulder, followed by several months of physical therapy. The hardest part, he said, was waiting until he could compete again.

Vincent was after another world championship, this time for Sanda, a traditional form of Chinese kickboxing. The competition, held in Italy in March 2022, was exactly six months after his surgery.

“It definitely gave me the hunger to get back in it. It was definitely a test of patience,” he said.

Vincent attended physical therapy, working on building back strength and mobility. Competing wouldn’t be easy, but it also wouldn’t be impossible—as long as he didn’t overwork his shoulder in the meantime. To his benefit, the competition was pushed back, giving him two more months to train. Slowly, Vincent returned to his full capability.

In May of 2022, Vincent flew to Italy, competing for the first time in over half a year.

“Being seven months out, it was like, ‘OK we’ll see how this goes,’” he said. “I went in there with a positive mindset and everything worked out.”

One athlete, one team

For Vincent, being a martial artist isn’t about innate skill. It’s about hard work and dedication. It’s about training and growing, trying to do better than the day before.

Reaching his goals, Vincent acknowledged, wouldn’t be possible if it weren’t for the community who surrounds him. His family, trainers, physical therapy team, and Dr. Daney all helped him become a champion in Italy.

“We always say you walk into the ring as an individual, but getting to that point, it’s a team effort,” he said. “It takes a village. It takes a community.”